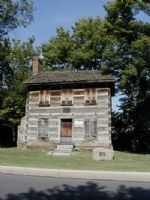 To learn more about the history of Franklin, Ohio visit the Franklin Area Historical Society.

Founded in 1796 by General William C. Schenck, who was a professional surveyor, Franklin began as a small collection of cabins along the Great Miami River in what was then the Northwest Territory. General Schenck named his new settlement after Benjamin Franklin. General Schenck, a native of New Jersey, and his wife, Betsey Rogers of Huntington, Long Island, relocated from Cincinnati to Franklin in 1803, the same year that Ohio was admitted to the Union as the 17th state. In 1805, Franklin became home to one of the first four post offices in Warren County. The first postmaster was John N. C. Schenck, brother of General Schenck. The original Franklin Post Office still stands today, though on a different site from that on which it was built in 1805.

The settlement of Franklin incorporated as the Village of Franklin in 1814. Slowly, Franklin grew and with the completion of the Miami & Erie Canal (which ran from Toledo to Cincinnati) through the village in 1829, the first industries were established. They included a pork slaughterhouse, sawmill, a flour mill, a barrel manufacturer and a whiskey distillery. Then, with the arrival of the railroad in neighboring Carlisle in 1851, both manufacturing and farming within the village took off. 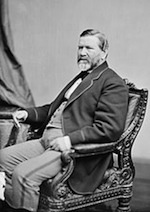 William and Betsey Schenck’s sons, James and Robert, made their marks on the national stage during these years. Eldest son James F. Schenck became a rear admiral in the U.S. Navy. During service in the Mexican-American War, James raised the first American flag to ever fly in California. His younger brother, Robert C. Schenck, acquired the reputation of being one of the ablest speakers in the Whig party in the 1840 Presidential campaign. Robert went on to be elected to the U.S. House of Representatives in 1843, 1845, 1847 and 1849. In 1851, he was appointed Minister (or ambassador ) to Brazil by President Fillmore.

In 1861 Robert again went into service for his country, being appointed by President Lincoln as Major General in the Union Army. After he was wounded at the second Battle of Bull Run, Robert resigned his commission in 1863 and returned to politics, being re-elected to the U.S. House of Representatives. He served in the House until 1870, when President Ulysses S. Grant appointed him as ambassador to England. 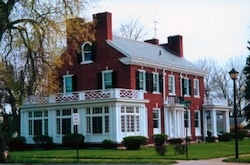 While the Schneck brothers were busy on the national stage, Franklin continued to prosper. By 1872, the railroad had expanded and came through Franklin itself. While the railroad’s expansion into Franklin was the death knell for the Miami-Erie Canal (which was officially abandoned in 1909), it did facilitate shipping for Franklin’s industries and manufacturing grew. The downtown quickly filled with fine brick and stone homes, businesses, churches and public buildings. The large brick and stone homes built facing the river were called “Mansion Row,” and many of these stately homes still stand today.

By the early 1890s, paper making was the dominant manufacturing business, with no fewer than five different factories operating in the village. The population of the village grew exponentially during this time, as workers needed in the factories migrated to Franklin. It was during this era of prosperity in the early 1890s that the community was captivated by the success of a racing horse raised in Franklin called Nightingale. Nightingale was owned by two local businessmen, D.M. Anderson and Charles Harding, and she won every race in which she was entered in years 1892 and 1893. Many locals lost their heads and began to bet more than was prudent on the horse. When Nightingale was eventually beaten in 1895 - she lost to a horse called Hamilton in Lexington, Kentucky - many local residents who bet on the race lost more than they could afford. Coincidentally, the First National Bank of Franklin failed around the same time, and Nightingale was thenceforth ever known as “the horse that broke the bank.”

By 1895, the national recession had also hit Franklin, causing several local factories to close. The community recovered, and in the period of the 1900s - 1920s several new industries were established, including the Brown, Carson, and Scheible Legging Factory (which made spats) the Uhlenbrock Cigar Factory, the Van Horne Electric Tube Company, the Logan Long Roofing Company and the Eldridge Entertainment House, which is now known as the Eldridge Publishing Company and is still in business today (though it relocated to Florida in the late 1980s). 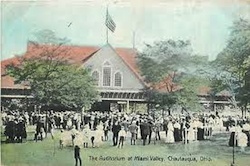 The early years of the twentieth century also saw the establishment of the Miami Valley Chautauqua in Franklin. Beginning in 1896 at the Franklin Fairgrounds, the popularity of the Chautauqua program necessitated larger accommodations and the company bought land on the west side of the Great Miami River just north of Franklin in 1901. A large auditorium, dining hall, and iron foot bridge over the river were constructed, and 1,200 trees of forty different varieties were transplanted to enhance the beauty of the natural grove. The summer programs included nationally known speakers, lectures, classes, religious activities and recreation.

By 1908, the summer programs at Chautauqua had become so popular that over 60 cottages were erected on the site, along with the ever-growing “tent city.” The Great Flood of 1913 - which saw Franklin’s entire west side flooded with up to ten feet of water-almost finished the Miami Valley Chautauqua, but by 1916 it was back on its feet. Attendance at the summer programs never again grew to pre-flood levels, however. The Miami Valley Chautauqua made it through the Great Depression and two world wars, but finally met its match with the growth of radio and television. Unable to draw the crowds, Chautauqua became a losing proposition financially. The grounds were finally sold in 1968.

Meanwhile, downtown Franklin continued to thrive. Opened in 1832, Thirkield Department Store moved in 1850 to the corner of Main and Fourth Streets. It served as Franklin’s general store and department store through the Great Depression and World War II, just as it had during the Civil War, World War I and the roaring Twenties. By the time of its closing in 1979, it was known as the oldest three-story building west of the Alleghenies. There were also three grocery stores downtown that served Franklin over the years - the G.R. Rossman & Company Grocery, located at the southwest corner of Main and Second Street, which closed in 1949; Berger’s Grocery on S. Main Street, which closed in 1963; and Kroger’s which occupied various locations downtown between 1910 and the 1970s, when it relocated to Springboro.

In 1929, the downtown also saw a change when the Miami-Erie Canal was drained. In 1934, work began on narrowing the channel of the canal, and the canal bed began to be filled in. The Franklin Chronicle announced in 1934 that there would be free parking on the canal bed - just an early example of the City’s support of downtown businesses. During the 1940s - 1960s industry and business continued to grow in Franklin, and in 1947 the Franklin Area Chamber of Commerce was formed. The purposes of the Chamber were to draw trade to Franklin, to promote Franklin and its businesses and to assist business growth in the community. The Chamber still fulfills these purposes today and has helped grow the business and industrial community in Franklin. After the 1950 census, Franklin’s population also grew, and Franklin officially became a City in 1951. In all subsequent censuses, Franklin’s population has continued to grow, standing at 11,771 as of the 2010 census. 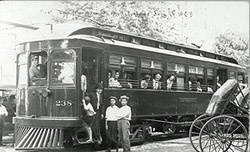 The years also saw many changes in transportation in Franklin, which in the early twentieth century boasted five modes of transport - the Miami River, the electric traction train system, several major state roads, the Miami-Erie canal and the railroad. An electric traction train system began running in Franklinin1897, and was one of the first electric roads in Ohio. The tracks eventually ran all the way from Cincinnati to Detroit and ran right through downtown Franklin. Feeling the pressure from the growing popularity of the passenger car, the tracks that ran down the middle of Main Street were removed in 1940. The removal of the tracks happened as part of a WPA project that saw the bricks of Main Street removed and a concrete thoroughfare put in.

The new “modern” Main Street was part of U.S. Route 25, known as the Dixie Highway, which ran from Michigan to Florida. This was a major north-south artery, and during WWII Franklin saw countless convoys of military equipment pass through town. State Route 73 was begun in 1955 and relieved much of the congestion on Main Street by offering a four-lane divided highway between Franklin and Middletown. Then, in 1960, Interstate 75, also then known the Dayton - Cincinnati Freeway, opened and replaced U.S. Route 25. The opening of Interstate 75 took the through traffic out of downtown Franklin, and the businesses and industries that relied on the highway slowing began to migrate east and away from downtown to be closer to the I-75 exits. This was not the end of the downtown street improvements, however, and in 1978 the Miami-Erie Canal bed was officially transformed into a highway, when Canal Street - renamed Riley Boulevard - opened on December 12, 1978. Riley Boulevard - named after former Mayor J.T. Riley - was constructed as a truck by-pass to keep trucks off the residential Main Street. 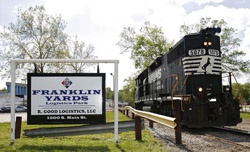 Franklin continued to move forward and in 1983, the residents of the City voted in the City’s first Charter. Franklin became a charter municipality on January 1, 1984. Since the 1980s, Franklin’s business and industrial base has continued to expand with the addition of several business parks along the I-75 corridor. Franklin’s residential areas have also increased with the addition of several new subdivisions. In 2008, Franklin partnered with the Warren County Economic Development Office and Good Enterprises to establish Franklin Yards Logistics Park. The facility is a multi-modal, multi-user rail hub that allows businesses and industries in southern Ohio to take advantage of freight rail - either shipping or receiving. Franklin Yards is one of only a handful of such facilities in the State.